Shortly after 5:00 a.m. on December 26, 1920, two New York City patrolmen found a middle-aged, rough-looking man lying outside the BMT subway entrance near 14th Street and Fourth Avenue. One of them rolled him over, reached inside his coat, and felt his chest, which was sticky with blood. Upon detecting a faint heartbeat, they summoned an ambulance to hurry him to nearby St. Vincent’s Hospital, where he was pronounced dead on arrival.

The man had been shot in the chest, stomach, and arms, each 32 calibre bullet shattering a bone or puncturing a vital organ. (The weapon itself was later found on the steps of the Union Square subway entrance.) His pockets contained $140 in cash, ruling out robbery as a murder motive. An autopsy revealed huge quantities of ethyl alcohol in his system, suggesting that he’d been killed in a drunken fight instead. The man was clearly a brawler: scars covered his broad face and short but muscular body, and both his ears and nose were disfigured by abuse. But who was he? And who had shot him?

Attendants at the city morgue found no means of identification save a label on the inside coat pocket that read “E. Eastman. Oct. 22, 1919. No. 17434 WB”. The tag was traced to Witty Brothers Tailors, a well-known men’s suit manufacturer. When the owner confirmed over the telephone that he had made the suit in question for one Edward ‘Monk’ Eastman, extras began flying off the presses at lightning speed.

Monk Eastman was a name that New Yorkers recognized immediately, even in 1920. Before his 1904 downfall and imprisonment, Eastman had been the most feared and storied gangster in the city, maybe even the country. In its Big Town Biography series, the Daily Newsrecalled, “In his glory, Monk … commanded an army of 1,200 of the city’s meanest thugs, a grimy bunch of safecrackers, pickpockets and general ruffians from dangerous dives with names like the Flea Bag, the Bucket of Blood and Suicide Hall.” He stood barely five foot six, but he was pure muscle and as ferocious as a bulldog in battle. When he strolled throughout his fiefdom, a derby perched carelessly on his head and stubby features crinkled in a scowl, even the beat cops eyed him with trepidation. For years he was as much a part of the Lower East Side cityscape as the crumbling tenements, raucous Bowery, and Chinatown.

That all changed in April 1904, when Eastman was sentenced to ten years in prison for first degree assault. He was paroled in 1909 and returned to his old stomping grounds, but his power had faded and he did not attempt to regain his former notoriety. Instead, he undertook a lower profile livelihood as a dope peddler. Because of his infamous past, however, the New York police kept hunting him down whenever major crimes took place. Eastman sought an escape by joining the army when the United States entered World War I. He served with valor in France, the Manhattan gang wars having prepared him well for the European battlefields, and came home a decorated war hero. He told reporters that he was “going straight” but by 1919 he was working for Arnold Rothstein as a loan collector and preparing to go into bootlegging once Prohibition became law. Now he was dead, murdered just as the Volstead Act was on the verge of turning gangsters into millionaires.

Newsmen tracked down and interviewed Charley Jones, a former Eastman gangster who now sold automobiles. Jones said that as far as he knew, his former boss had gone straight and opened a pet store on Broadway. The aging ex-thug did suggest that “young squirt gunmen” might have spotted Eastman on the street and, trying to make a name for themselves, shot down a legend in cold blood. 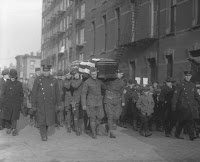 Three days before New Year’s, over four thousand spectators assembled in the cold to watch a local legend be laid to rest. Eastman’s army comrades exchanged fond, teary memories with grizzled veterans of the 1902-03 Manhattan gang wars. The latter took one last look at their former boss, a now-peaceful figure dressed in full military regalia, and watched with lowered heads as he was buried in Cypress Hills Cemetery in Queens.

Unlike most gangland murders, Eastman’s was ultimately solved. On January 4, 1921, a shady Prohibition agent named Jerry W. Bohan turned himself in.

Bohan claimed that he had killed the one-time gang lord in self-defense. On Christmas night, he, Eastman and some friends went to the Blue Bird Café, a basement speakeasy on Fourteenth Street, and drank bootleg liquor for hours. At around 4:00 am, they began arguing. According to Bohan, the dispute was over how much to tip the staff, but since he and Eastman were partners in a bootlegging enterprise, they probably clashed over how much they, not the waiter, had coming to them.

Bohan said that he tried to leave the café when tempers became dangerously high, but Eastman chased him outside and accused him of having been a “rat” ever since he became a Prohibition agent. The gangster then allegedly reached into his coat pocket as if going for a weapon. The dry agent drew his gun, fired several times, and jumped into a cab heading north on Fourth Avenue.

The jury at Bohan’s trial listened to his version of events with scepticism, knowing that his past was not exactly spotless. In 1911 he had killed Brooklyn stevedore ‘Joe the Bear’ Faulkner under questionable circumstances and been acquitted, but this jury was not so gullible. They found him guilty of manslaughter, and the judge sentenced him to three to ten years in Sing Sing. He was paroled the following June, his minimum term having been reduced for good behavior.

According to the promotional literature accompanying the Our Gotham film project, “The life and crimes of Monk Eastman faded for awhile from public memory as the Twenties progressed and millionaire gangsters like Al Capone and Bugs Moran assumed the cachet of movie stars. But sooner or later, antiquity becomes modernity, and Eastman has been resurrected time and again in literature and film…. Today, Monk Eastman lives on in the popular imagination as the archetypical early New York gangster. His name is not always remembered, but with his harsh ‘Noo Yawk’ accent, battle-ravaged features, and multi-notched club, (he) remains an integral part of Manhattan mythology.”